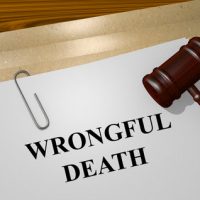 A widower has been allowed to proceed with a lawsuit after his wife died on the job when a robot fell on top of her. The deceased was employed as a journeyman maintenance technician. The robot fell on top of the woman crushing her to death. Her husband filed a wrongful death lawsuit against several named defendants, including the company she worked for. However, the company moved to dismiss the lawsuit on the basis of exclusive remedy.

In most cases, employees are not allowed to file lawsuits against their employers because of workers’ compensation immunity. In any case that workers’ compensation covers, the employee is barred from filing a lawsuit. However, in this case, the defendant’s motion to dismiss was denied and the wrongful death lawsuit was allowed to move forward. In this article, we’ll take a look at the decision.

Lawsuits against third parties are allowed to move forward. In this case, the company for whom the deceased worked settled their workers’ compensation claim with the family. That left other named defendants still holding the hot potato.

In this case, the company that manufactured the robot was accused of negligence for failing to properly install the machine. This led to the machine falling over and crushing the worker.

The robot manufacturer argued that because the defendant was compensated through the workers’ compensation system, the company was immune from third-party lawsuits filed by the same defendant. However, the robot manufacturer and the company for whom the deceased work, while having two different names, were argued to be the same company—a fact which the plaintiff admitted. In light of that information, the defendant should be barred from filing a second claim and naming the company as a second defendant.

However, the judge did not agree. The judge refused to dismiss the case on the grounds that discovery was still ongoing and there was no way to know what could be found until discovery had been completed.

The plaintiffs will need to show that there is some form of double standard being employed. In other words, the two companies are treated separately when it suits them in court and are treated the same when it suits the company to do so. But companies don’t have more than one name, even if they are subsidiaries and the company that installed the machine contributed negligence to this case.

Nonetheless, the plaintiff is claiming that the robot manufacturer and installer is a separate company that contributed negligence while the robot manufacturer claims they are the same company that the defendant worked for. This decision will be subject to Michigan rules concerning workers’ compensation. The State of Georgia may have found in favor of the defendant in this action.

By O’Connell Law Firm | Posted on September 22, 2021
« Lawsuit Filed On Behalf Of McDonald’s Employees Seeks Safety Measures
Integrated Approaches To Workers’ Compensation Could Be The Future »