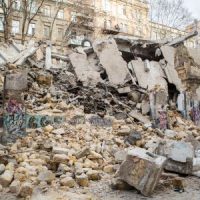 A demolition worker was killed recently when he was operating an excavator at a demolition site. The rig fell through the floor causing the worker to drop 9 stories to his death. They were attempting to demolish a garage when the incident occurred. Making matters worse, the company has a history of OSHA violations several shortcuts taken by the company. Specifically, they never tested the strength of the floors to determine if the floors could support a heavy machine like an excavator.

As of yet, no lawsuits have been filed over the workers’ death, but that is likely to change.

Companies have conflicting duties of care under American law. The executives have a duty of care to the board members and investors to ensure that they are meeting their fiduciary duty to their stakeholders. They also have a duty of care to the public and to their workers. While the public can sue the company for injury, their workers generally cannot. Hence, if you’re going to cut costs, the best place to cut them under our system of government is employee safety. It just makes economic sense.

Since employees cannot sue their employers under most states’ workers’ compensation systems, the costs associated with their conduct are generally already paid for by their workers’ compensation premium. This is true even when the death is directly the result of the employer’s negligence. OSHA steps in to levy a fine somewhere in the range of $100,000 per employee death, and the company can write the entire thing off. In other words, the economics play out such that the safest way to reduce your costs is to cut corners when it comes to employee safety, pay the OSHA fine, and move forward.

As you can see, OSHA might mention the fact that you have multiple citations against your company in a press release, but will the company face substantially higher fines? Even if they do, would the cost to the company be anywhere close to the amount of money they would receive in a personal injury lawsuit? The answer is no. The workers’ compensation insurer would pay death benefits to the family, a fraction of what the employee would have received if they were still alive. Further, the family does not get to sue over their grief and the loss of a loved one.

So, while we may pretend that we have a duty of care to employees, that duty of care is actually overridden by the duty of care to investors who can also sue a company for breach of fiduciary duty. Ultimately, those lawsuits are much scarier to companies than OSHA fines and so, worker safety comes last.

If you’ve been injured on the job, the Decatur workers’ compensation attorneys at The O’Connell Law Firm can help you litigate your claim and recover the money owed you by contract. Call today to schedule a free consultation and we can discuss your options in more detail.